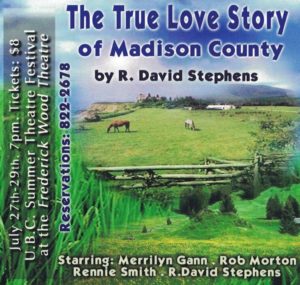 It’s eight years after Bridges was published, and Richard’s son, Michael, has just discov­ered a series of audio tapes his late father made in an effort to come to terms with Francesca’s affair and save his marriage.  Michael sends them to his sister, Carolyn, and gets another shock in return.  She has received letters from Flo Miller, a former high school classmate of their father.  In them, Flo tells of her life-long love for Richard.

He calls it The True Love Story of Madison County.